Buy a Car Your Way [Your Rules] 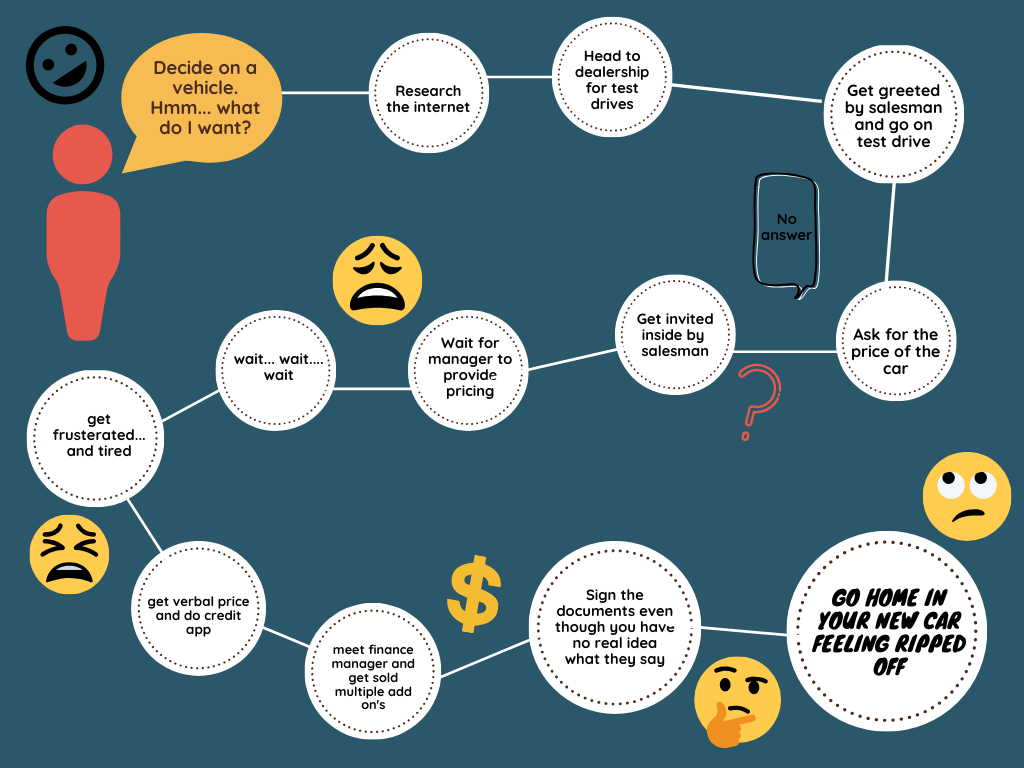 What people don’t know about buying a car is that it doesn’t have to be a paid. The key to buying a car like an expert is knowledge.

Experts who frequently buy a car not only get the best deals on vehicles, they know how to play by their own rules and elevate the whole experience. Knowing how to achieve both is crucial!

Everyone knows that when you buy a car the traditional way, it's a pain.

As a former car salesman, I know the routine.  The traditional way to buy a car works like this.

The first step is identifying the vehicle you want to buy.

In this stage, you are searching the internet to find the make, model and bells and whistles of the vehicle you might be interested in purchasing. After finding one or more possibilities, you head to a dealership for test drives. This is where the fun begins!

First, you are greeted by a salesman; only to find out quickly that you know more about the vehicle than the person helping you. Your description of the vehicle desired might not have an exact match at the dealership; so, he encourages you to drive a similar one in inventory.

After getting back from the test drive, the salesman invites you inside. You’ve probably asked how much the vehicle costs.

The salesman doesn’t answer; rather, he stalls until there is an opportunity to meet with the manager.

Next, he’ll assure you they have the best deals and probably even comment that the availability of internet searches makes competitive pricing a necessity.

After a couple hours have passed and you realize no exact cost for the vehicle has actually been presented; you are given a verbal estimate.

But, you want to see it in writing.

Finally, if you are lucky, he shows you the numbers. “Is it a good deal or not?” you ask yourself. The average consumer who has invested a ton of time and is excited about driving home in a new ride often agrees to this deal.

The next step to buy a car: the car salesman asks you to fill out a credit application to calculate a monthly payment.

If you already determined your monthly payment, chances are the rate you were quoted is higher than the rate you can actually get approved for.

Most of the time however, they will not even tell you a rate until they pull credit. How do you know if that’s a good rate? How are they telling you a payment if they do not know the rate on the loan? You just want to get out of there so you do the credit application.

After an hour or so the salesman introduces you to the finance manager. You follow him to his office where he tries to sell the benefits of all these additional products you need.

Do you really need them? What is the interest rate on the loan again?  “Just get me out of here” you mumble under your breath. You sign the documents and almost immediately you feel like you may have been ripped off.

Unfortunately, most dealerships prefer that the transaction goes this way.

Why? Because, that’s how they maximize profit! They negotiate hundreds, maybe even thousands of car deals a year. How often do YOU buy? They are experts and the more complicated the transaction, the bigger the profit. I don’t blame them.

If you think you have been taken advantage of by a dealership you have no one to blame but yourself. Hear me LOUD and CLEAR: YOU are in control.  You have the pen.  No one is forcing you to sign the documents.

You should be confident when you go to buy a car and before you agree to anything.

Buy a car and set the rules for the transaction

Before you step foot inside any dealership, you should already know the entire deal. I’m talking about sale price, trade-in value, financing rates, add-ons and the exact payment. You can do this from the comfort of your own home.

And it doesn’t include signing up for any “free” car buying site that claims to provide the price others have paid for the car you want. All you’ll benefit from those sites are bombarding emails and phone calls from dealers attempting to get you to visit their store. Nothing of value is “free” and neither are so-called “free” sites that are usually powered by a single company. That company gets paid by charging the dealership when they send them your contact information. They are nothing more than lead generation for the dealerships.

You still need to negotiate the deal.  It’s the same thing when it comes to the sites where you search for cars. In today’s market, the sale prices you see online are often so low that the dealership never plans on selling at that price. What you’ll get is the price you’ll see for people that have only four fingers and three toes! Unfortunately, you have all your toes and fingers so you don’t qualify for that price. Oh, and the price you see online doesn’t include the destination fee or all the useless things you don’t need that are already on the vehicle. Or, you need to finance at a crazy interest rate to get that price. It’s sad but true. Try it and tell me I am lying.

The new trick I am seeing is the complete opposite approach.  Some manufacturers don’t allow their dealers to advertise vehicles below a certain number or even publicize it online. So, when you are searching for the price of the vehicle it looks like everyone is charging the same. Tricky right?  It’s almost as if the dealers agreed to show everyone the same price to convince people that’s what they should pay.

So, what's my point?

Car dealers will claim that the internet forces them not to negotiate as in the past. They will say they have priced their cars competitively just to get people in the door. The problem is that dealers with the lowest prices online are sometimes the grimiest ones to deal with.

So, if you find a super deal online; don’t believe that’s the price that stands when you get there. The only way you can buy a car without spending hours at multiple dealerships and going through the gauntlet is to call or email the dealership.

That brings us to the next issue which is finding someone to be transparent and honest about the pricing they are giving you. It’s hard enough to have a dealer give you exact pricing while you are at their physical location, let alone doing it over the phone. After years of perfecting my process of negotiating with the dealerships remotely; I know what to do.

I teach people how I negotiate these deals from thousands of miles away. And I can teach you how you can do it from your couch. For the people who prefer to let the expert do it, I am still for hire and will save you a lot of time and headaches to assure that you will not get ripped off.

Let me leave you with a pro tip.

Before doing business with any dealership, identify who you want to work with.  Many people look at reviews but in the car business there are huge differences from one salesman to the next. Dealer Rater is one place where you can find reviews or simply call the dealership and ask for their highest volume salesman. He’s the one with the most knowledge and the best at his job. Once you have identified the salesman or dealership of choice, your first interaction with them should always be positive.  Tell them you discovered them by reading reviews and that you plan to do a review on them as well.

How can you learn more of these tips and tricks? Subscribe to my YouTube page. It’s a great way to support me and it costs you absolutely nothing. We’re creating content that shows behind the scenes looks at deals we negotiate, pro tips on how to get the best deal and how we make the overall experience better. We’ll post reviews on new vehicles that launch, describe how to get the best finance rates and lots of info on smart car buying. See you there! 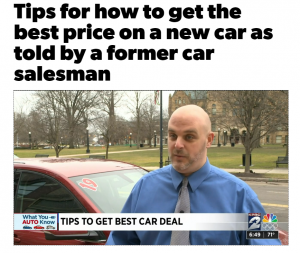 As a professional car negotiator and car buying expert, I didn’t hesitate to Go LIVE on Facebook with Emmy Award Winning – Consumer Reporter, Amy Davis at KPRC- Click-2-Houston to answer consumer car-buying questions like this common one: How To Beat The Car Salesman. 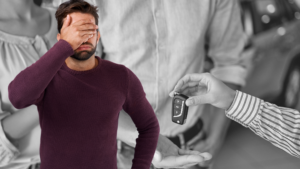 Let’s talk about the 5 Car Buying Mistakes people make.
It’s a complicated transaction; buying a car.
You have got to come in with the knowledge and confidence to make yourself a fair and even better good deal. 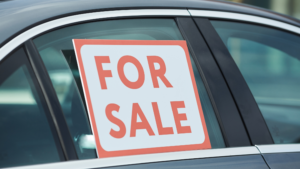 Should You Sell a Car By Owner?

I’ll take you down a decision-making process to help you determine whether to trade in or whether to try to sell a car private party.